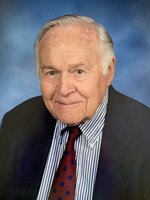 Peter Rennie Paterson, Age 91, of Wilmington died on November 3, 2020. He is preceded in death by his beloved son Peter C. Paterson and his loving wife of 59 years, Janet C. Paterson. He leaves a son, Andrew Paterson (Laura) of Denver, CO, and daughter, Ava Paterson Werner (Jim) of Los Osos, CA, daughter-in-law Melissa Paterson of Newtown, PA, and eight grandchildren, Kate, Reed and Cole of Denver, CO, Cassandra and Mason of Newtown, PA, and Emmet, Liam and Findley of Los Osos, CA. Peter was born on August 15, 1929 in New York City. The only child of Scottish parents, he spent his summers in Glasgow, Scotland at the home of his maternal grandparents until the war threatened in 1939. They had luckily made the last passenger ship home before they stopped all passenger ships to America, and there were many threats of U Boats along the way. Peter graduated from Upsala College in East Orange, New Jersey in 1952 and began a varied career in art and advertising in New York City. He and Janet were married in 1961 at the National Arts Club in Gramercy Park. They spent many years living in NYC and later in Maplewood, NJ, Wilton, CT, and Sudbury, MA. He and his wife also travelled in Europe, being particularly fond of Italy. Peter had a notable career designing commercial wallcoverings that still shape that industry today. His interest in painting started early in his life and became a full-time occupation in the late 1990’s. He won several awards in local shows and sold more than 100 paintings across the country. His interest in art lead him to become an active member in the Wilmington Art Association and the Wilmington Arts Council. During his final years he taught a free art class as the Wilmington Senior Center, which he enjoyed very much. We will miss his stories and good humor, but are we comforted that he is now with our mother and brother who preceded him in death. There are many things he left behind to remember him by like his many antique clocks (in various states of disrepair and all generally going off at different times), old tools, gadgets of all kinds (some working some not), and most of all his wonderful paintings. The family would again like to thank Peter’s wonderful life-long friends and neighbors for their love and support. At his request, there will be no memorial service, just a celebration of life with those closest to him in 2021. Those wishing to write a condolence may send them to Andrew in Denver. Memorial contributions may be made to the Cameron Art Museum in Wilmington, NC.