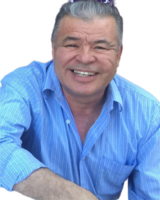 Gabriel Luevano Soto was 62, he was born March 31, 1959, in La Noria de Molinos, Luis Moya, Zacatecas. Gabriel was the first child to J. Jesus Luevano Chavez and Esther Soto Soto. He was the oldest of 9 siblings. Gabriel is survived by his 5 children Sandra, Gabriela, Thalia, Oscar and Emily and 8 grandchildren. Gabriel was a very hardworking helpful man. His greatest passion was driving semis locally or out of state. He really enjoyed baseball. He never gave up on life no matter what obstacle was put in front of him. He was a great man, father, son and brother. He fought until the very end he was a warrior and now our Angel. We will miss him dearly. Viewing/visitation, Friday, 1:30pm with a memorial service to follow. Feldman Mortuary Chapel.