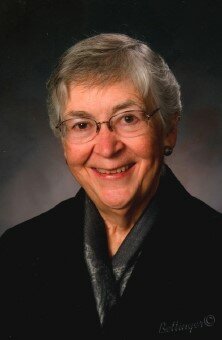 "I WISH I HAD 100 MS GRNOBLS,” wrote a kindergartener during the celebration of
the 100th day of school. This is the sentiment shared by all of those who were touched
by Barbara Grenoble. She was an outstanding musician and a consummate music
educator.

Barbara Jane Grenoble, born on September 15, 1933, in Lewisburg, PA, passed away
from congestive heart failure complications on November 27, 2022.
Barbara was a born teacher. From coaching softball to teaching Sunday school, she
developed her teaching expertise at an early age. But the day she picked up a flute was
the beginning of her extraordinary journey into music as well as education. In addition
to her studies at Eastman School of Music, where she earned a Bachelor’s degree in
Instrumental Music Education, Barbara spent summers in the Catskills waitressing,
cleaning cabins and playing her flute for vacationers, all at the same venue.

Forever watching cowboy movies, Barbara began to dream of moving to Colorado. The
Eastman placement bureau found a teaching position in Leadville, Colorado.
Unfortunately (or fortunately for us), the school board wouldn’t hire a woman!
However, she was hired to teach band and orchestra in an Englewood, Colorado,
public school. After days on the train from Pennsylvania, she arrived only to find out
that this second teaching position had evaporated. Luckily, she was offered an
alternative: to teach K - 6th general music.

In addition to her teaching position, Barbara taught private flute lessons and played
flute in the Community Arts Orchestra and the Central City Opera Orchestra. During
that time, Barbara learned of a new and innovative educational approach called Orff
Schulwerk (conceived by Carl Orff and others, it literally means “schoolwork”).
Compelled to learn all she could about this forward-looking approach, Barbara headed
to Toronto and was in the first group to receive their teacher certificates from the
University of Toronto in 1962.

Now an Orff specialist, Barbara taught for eleven years in Englewood Public Schools
and then for eight years at National Jewish Hospital. She also traveled to teach at many
Early Childhood Education Centers in and around Denver. Fellow Orff specialist
Judith Thomas-Solomon fondly remembers Barbara “bounding from pre-school to preschool
in an RV camper, Orff instruments a-dangle and a-flap! She taught children
exactly where ‘they lived’ — with ingenuity and fancifulness, and at the edge of all
their curiosities.”

After this time, Barbara no longer needed the Winnebago RV because she and former
student - now colleague Peggy McCreary had bought and renovated a church in
Englewood, Colorado, set down roots there, and transformed the church into the
Grenoble Studio of Musical Arts, where they taught children from four years old
through high school. A line of registrants trailed around the building and down the
block at the first year’s registration. Barbara’s teaching there was permeated by her
knowledge of the whimsy and natural curiosity of children.

Barbara and Peggy, through a synergetic relationship, expanded the scope of the music
studio to offer Orff Schulwerk teacher training classes. Barbara’s “Monday Night”
Teacher Training classes are legendary among music teachers here in Colorado. This
wise teacher gave insight into how to construct music curriculum, how to redirect the
obstreperous “Harry” in our classrooms, and how important it is to listen to each child.
Beyond Colorado, teachers all over the United States and Canada have benefited from
her hundreds of workshops sponsored by professional education organizations such as
the American Orff-Schulwerk Association (AOSA) and its local chapters, the National
Association for Music Education and its state affiliates, and the National Association
for the Education of Young Children and its local branches.

Shoehorned in among all of the above, Barbara established and directed one of the
earliest AOSA teacher training programs at the University of Denver, offering college
credit, a Master’s degree, and certification by the national Orff organization. Even at
age 87, in 2021, she and Peggy presented workshops – during Covid, in-person and on
Zoom! Can you imagine, Barbara’s career spanned 65 years of classes for children, 51
years of weekly classes for teachers (4,590 hours), 21 concurrent years of summer
teacher training classes, and 57 concurrent years of presenting workshops!
Among the awards Barbara received over the course of her teaching career were the
Distinguished Service Award from the AOSA and a Lifetime Honorary Membership
from the Rocky Mountain Chapter of AOSA, which she founded. She was inducted
into the Colorado Music Educators Hall of Fame in 2009.

In their spare time Barbara and Peggy loved car trips to the mountains with their
steadfast golden retrievers. Over the years she and Peggy also enjoyed traveling to
various sites around the Southwest. Barbara had a special regard for Native American
cultures. She and Peggy shared this cultural esteem with their students, from the
simple secret beauty within a cottonwood twig to entire summer music camp cultural
explorations. Barbara found joy and beauty wherever she went, especially this past
October, traveling with Peggy to Taos, New Mexico.

Barbara is survived by her cherished spouse Peggy McCreary; and by her niece Ruth
Melville and nephews Fred Grenoble III and Clark Grenoble.

In lieu of flowers, donations can be made to the Rocky Mountain Chapter AOSA
Scholarship Fund https://www.rockymountainorff.org/donations. Checks can be
mailed to RMC-AOSA, PO Box 501, Broomfield, CO 80038. Or make an online
donation to the AOSA Keetman Assistance Fund https://member.aosa.org/donation/
make-a-gift-2.